Atauro Island is a pristine paradise north of the main island of Timor-Leste. Timor-Leste, better known to some as East Timor, is the world’s fourth-newest country and the youngest one in Asia — founded after a bloody battle for independence from Indonesia that began in 1999. Although Timor-Leste’s sovereignty has been recognized internationally since 2002, the country and its beautiful islands, like Atauro, have yet to pop up on the world’s tourism radar. That won’t be the case for very long. Atauro Island is nearly devoid of beach clubs and tourists, but it offers incredible water-based and cultural activities. Here’s how to get there and why you need to visit this island before it becomes a mainstream destination. 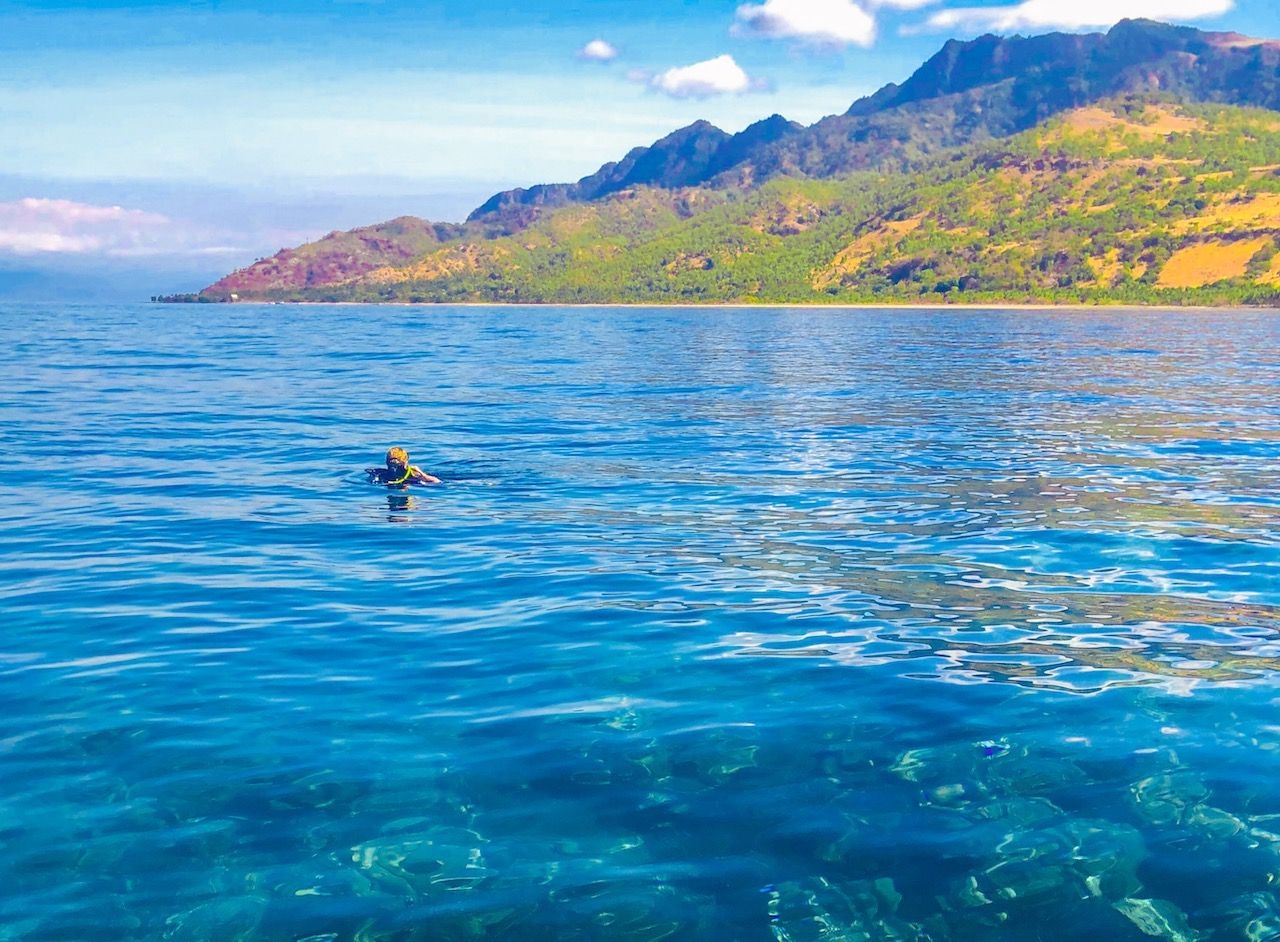 Atauro Island lies 215.5 miles north of Dili, the capital of Timor-Leste. It’s a small island, just over 14 miles long, and home to under 10,000 people. Atauro lies in the middle of the famed Indonesian Throughflow, a warm ocean current that brings a rich assortment of nutrients south from the Banda Sea. These nutrients bestow Atauro with the richest reefs in the Coral Triangle, particularly significant given that this area is already considered the “Amazon Rainforest of the ocean.” In 2016 the prestigious title became official when a Conservation International team analyzed sealife surrounding the island and found an average of 253 reef fish species right off the island, making these waters the most biodiverse ever recorded. You read that right: not the Carribbean, the Maldives, or South Africa but a tiny island in a country that many people don’t even know exists.

The diving is vibrant and biodiverse 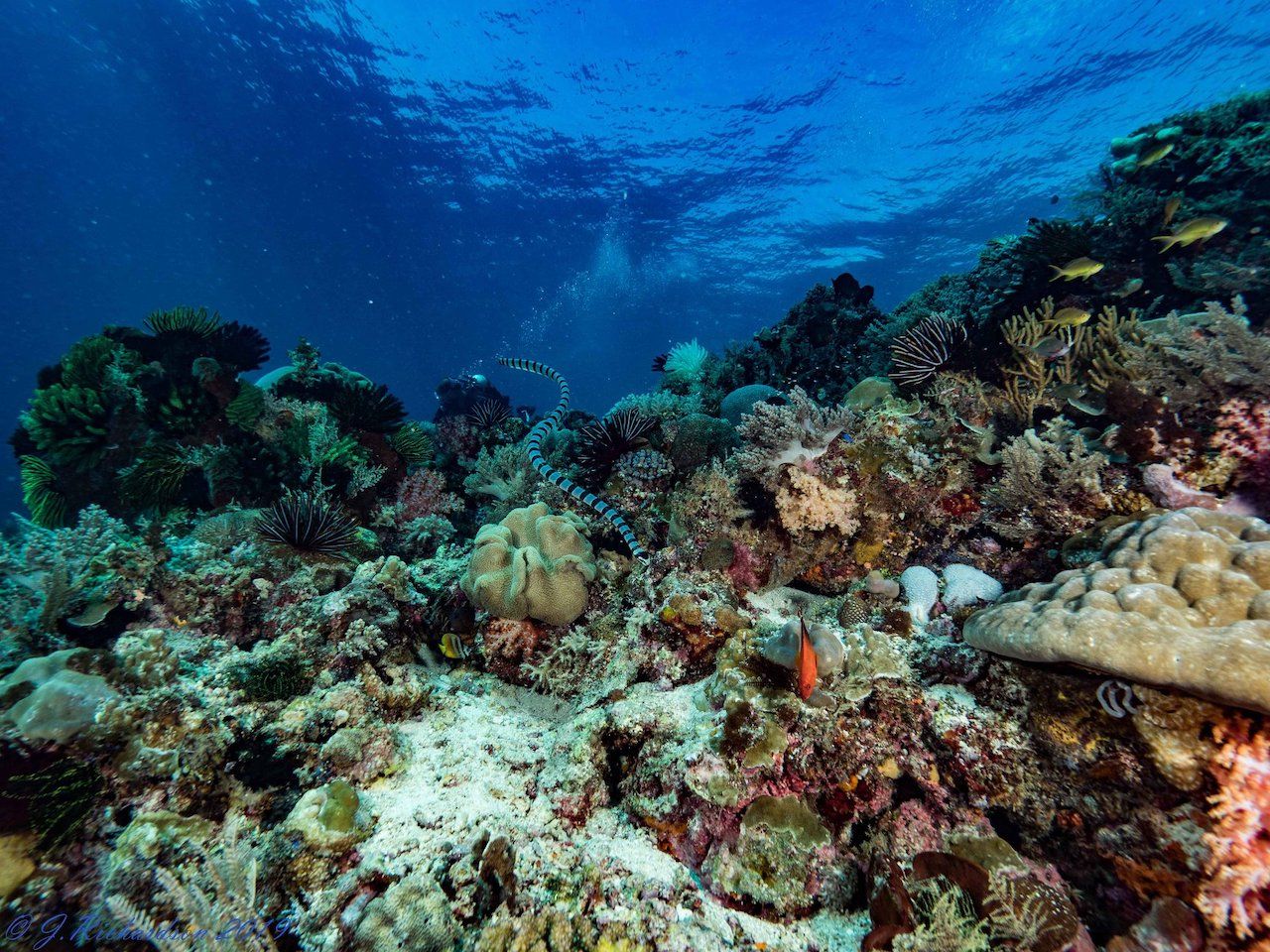 Because of the diverse reef ecosystems and warm waters, diving is what looks to be the driving force behind any coming boon to tourism on Atauro Island. Travelers who make the long journey to Timor-Leste can witness the underwater treasures firsthand. Dive sites surrounding the island include breathtaking wall drop-offs that plummet miles deep towards the ocean bottom, coral garden descending slopes, and fringing coastal reefs teeming with an abundance of varied aquatic fauna, some of which are exclusive to this location. In general, the water is also incredibly clear, providing excellent visibility.

If you go, you’ll have more than 10 dive sites to choose from across the island, depending on what you are looking for. Contact any of the dive operators operating on the island, such as Beloi Beach Hotel Dive Resort or Atauro Dive Resort, and they will line you up with a dive suitable for your ability and interests.

The best diving is located on the eastern side of the island, primarily at the Beloi and Vila dive spots. Here the waters are a deep blue, penetrated by the bright colors of the reefs and fish that live within them. On Atauro’s western side, dive at Macquer down south, Kitali and Adara in the central part of the island, and Douro and Vatuo up north.

However, you can still enjoy this beautiful island’s reef system even if you don’t have your Open Water Diver certification. One of the benefits of this destination, for those who can swim at least, is that from the hotels listed above or other coastal lodging, you can swim out from your doorstep to hit the reef. Unlike many tropical destinations where guests need to charter an expensive boat to take them out, the reef is literally right there on Atauro; you’ll see it through your hotel room window on most days. Grab a snorkel, and in only five minutes you can move from your bed to being face to face with dozens of turtles. Hotels and shops rent snorkel gear for a few dollars with no need to reserve in advance.

How to get to Atauro Island 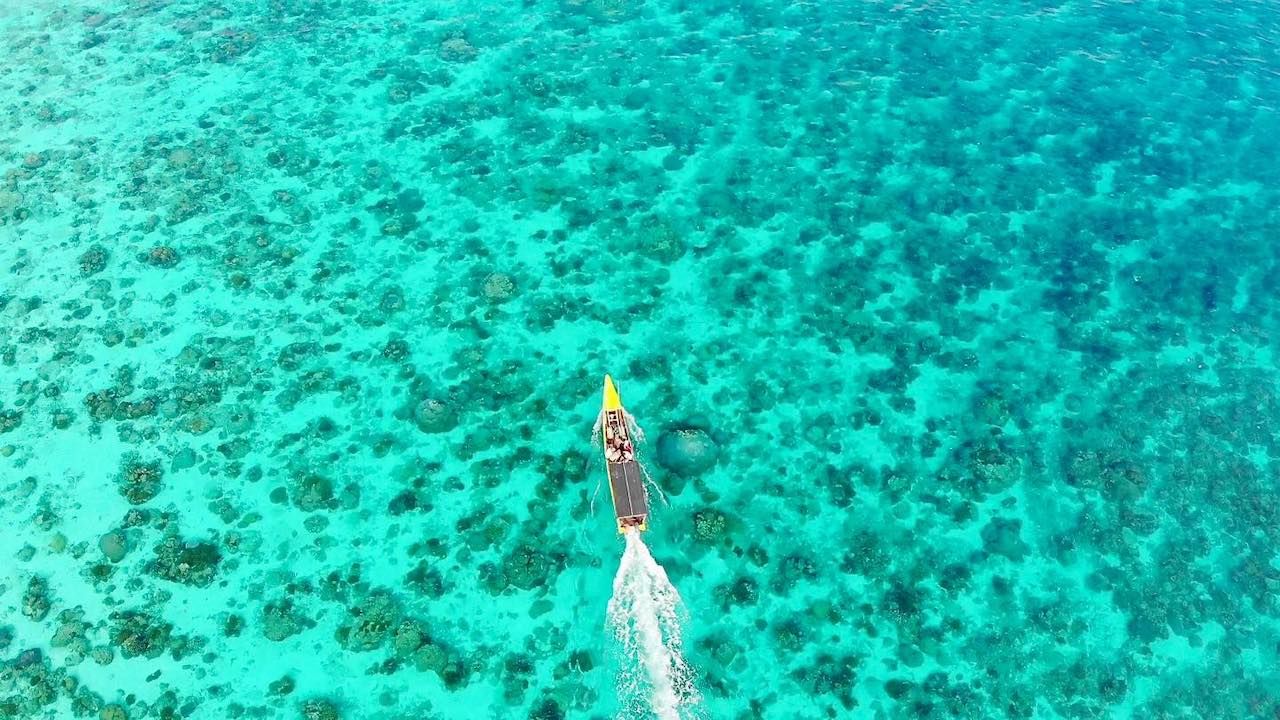 Available transportation to the island varies by season and can change without much notice, but in general, there are two primary options: a ferry or private charter boat across the Wetar Strait from Dili to Atauro Island or a flight. The Nakroma Ferry departs Saturday at 9:00 AM from the Dili port and will run you about $4, and the Laju Laju ferry departs on Thursday at 8:00 AM from the Dili port and costs $5. The small ferries take about three hours to arrive at Atauro. You can then return to Dili on either of those days for $3.

Speed boats are also available for charter for $45 each. Make sure you check the current information before arriving since in this young, developing country things change all the time. You can also book a chartered flight with Mission Aviation Fellowship and get there in 20 minutes.

Where to stay in Atauro 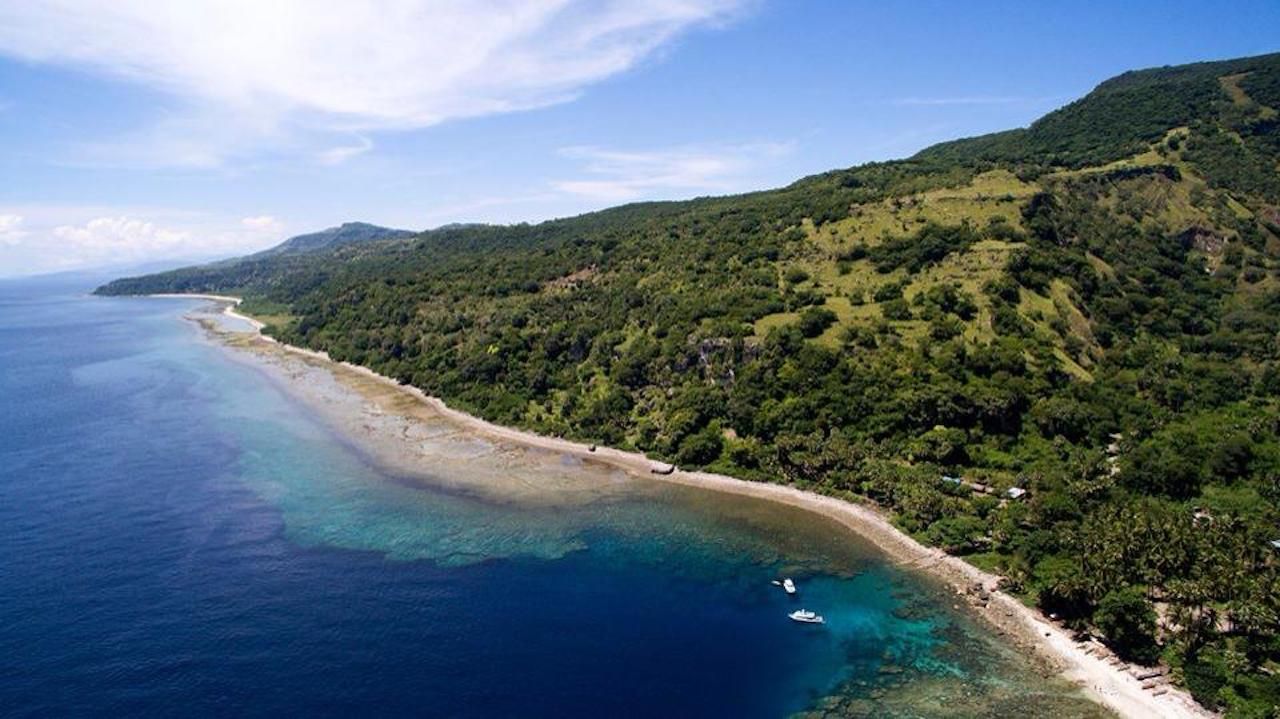 Because tourism is still up and coming, it’s easy to count and understand the different places to stay on the island. While all are rustic, each one is a little different, and all are friendly and welcoming. 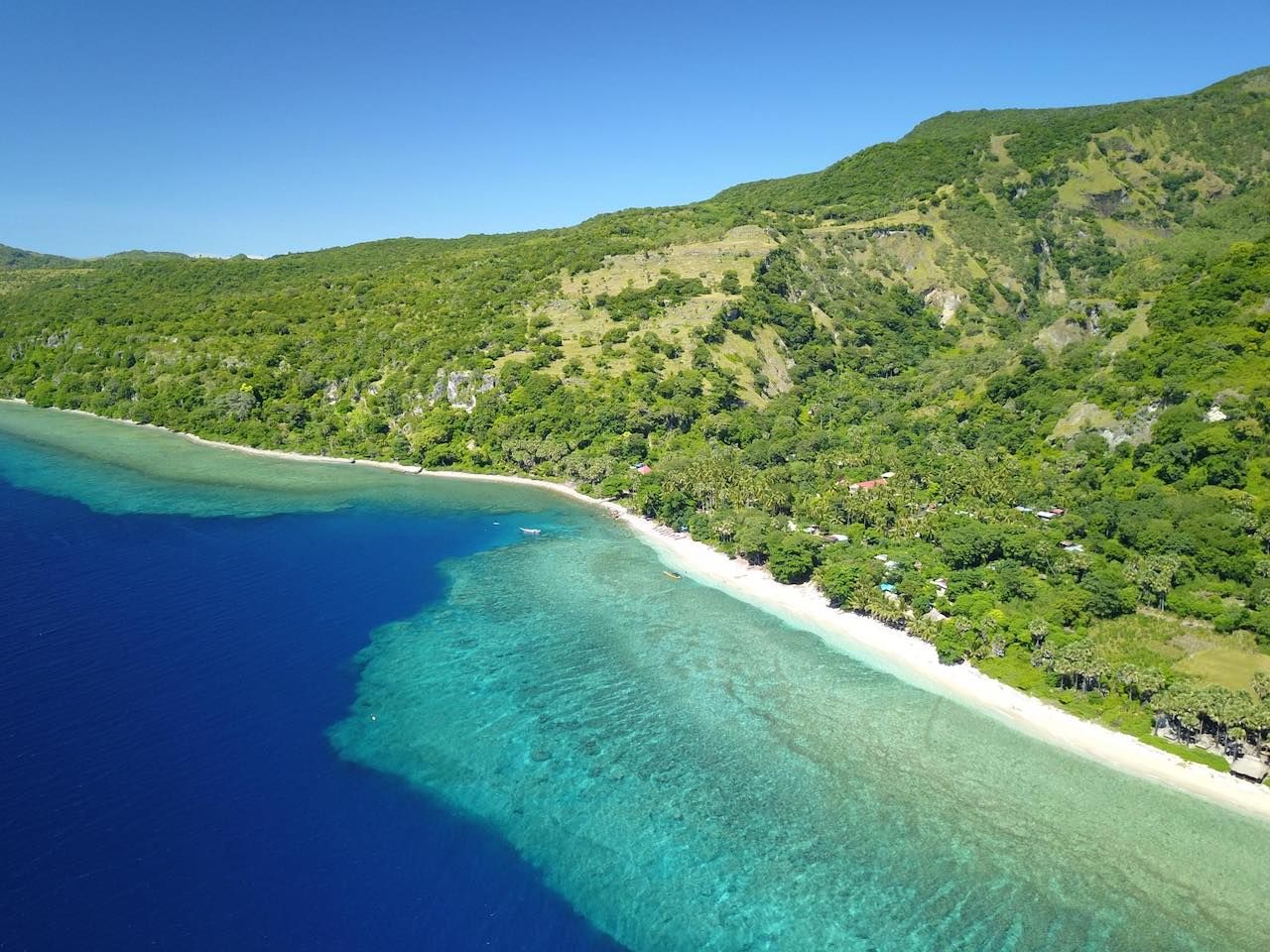 The owners of Ataúro Dive Resort, Saphi from Kenya and Volker from Germany, are dive masters who have built their resort in hopes of introducing the rest of the world to the beauty of this place. It has all the trappings of a wellness retreat. You’ll eat vegan passion fruit popsicles with the ocean in the background and chill with a book and the breeze, sign up for any of the three dive times scheduled each day, or hit the water for a snorkel. The reef right outside this hotel was found to be the most biodiverse in the country, so you’re bound to see ample sea life.

The best-known place to stay in the country is Barry’s Place, right on the water. This is an eco-lodge in every sense of the word. Environmental conservation is a primary focus of the institution, which you’ll experience first-hand through compost toilets, on-site recycling facilities, and solar panels right outside. If you are interested in eco-accommodation, beautiful places, and serene relaxation, Barry’s is a great option. However, it does not operate diving out of the lodge, so you will have to coordinate with another island operator. 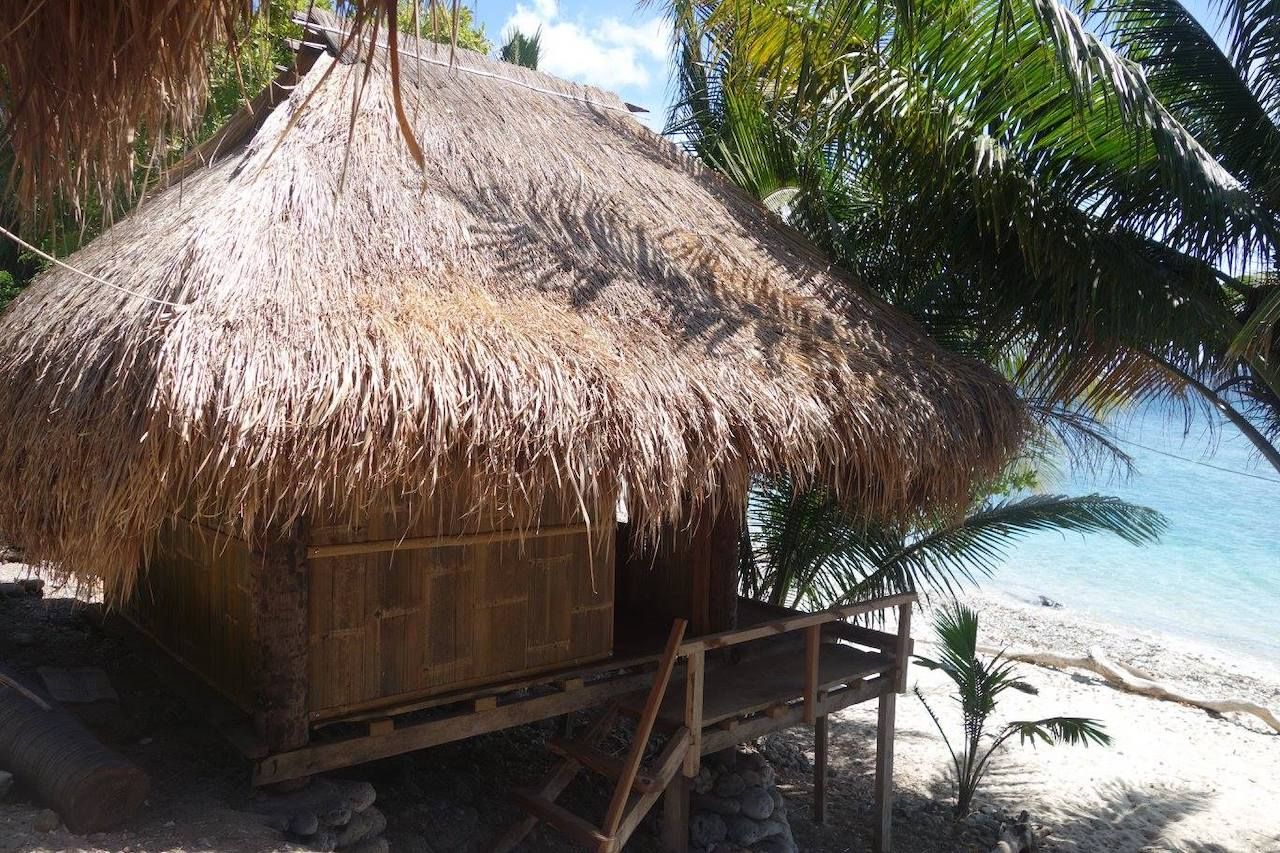 On the more underdeveloped and less-visited side of the island, this relatively new eco-lodge was built by a beloved local, Mario Gomes, near his home village. His rustic accommodations put guests in a simple thatched bungalow at the water’s edge. The resort is known for its locally grown pumpkin curry and lack of internet access — making it an ideal place to unplug and relax. The sunsets are positively magical here, though you’ll have to revel in them quietly since connecting to Instagram may prove to be quite a challenge. 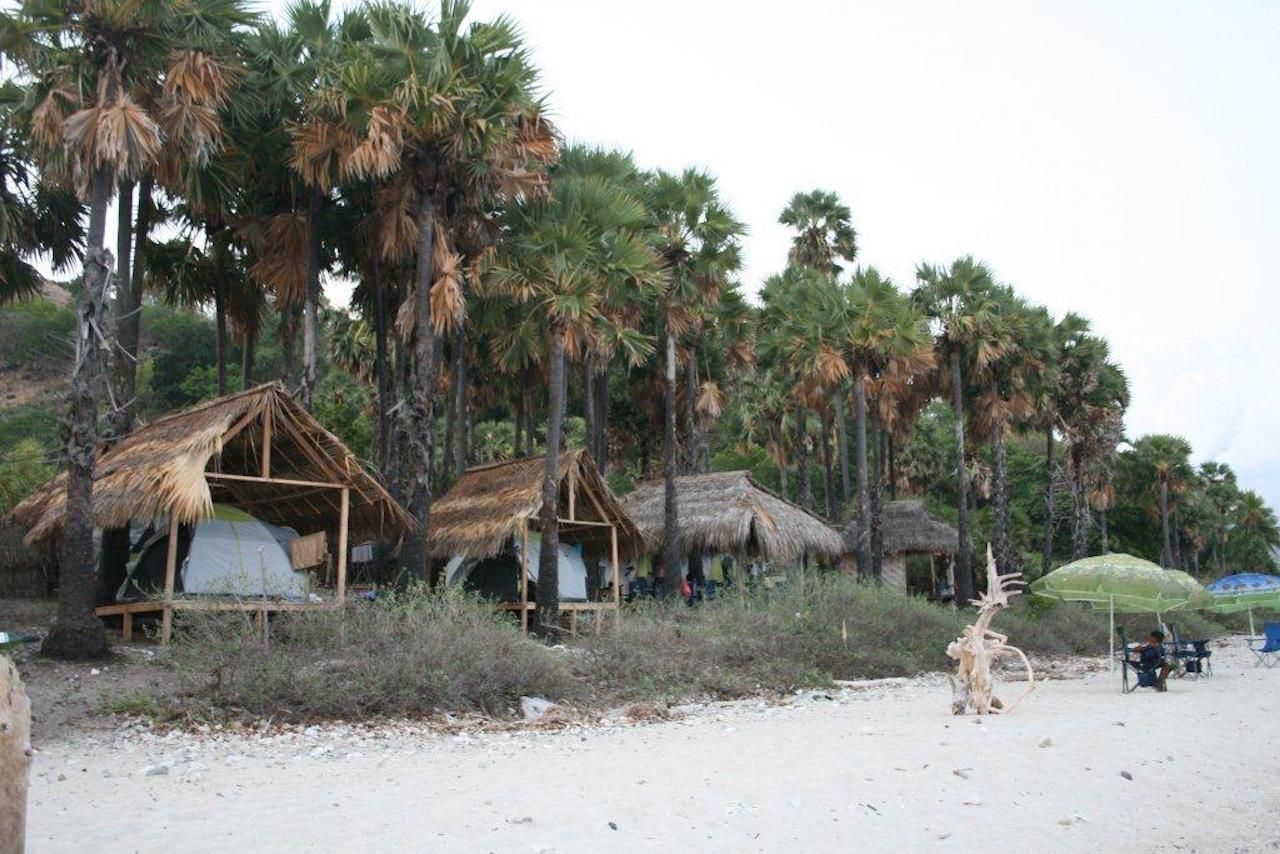 Compass Charters & Ocean Adventures has its headquarters in Dili but runs two Eco Camps on Atauro, one in Beloi and the other on the west coast in Adara, close to Mario’s place. It also operates diving on the island. Equipment is available for rent through any of the operators. Prices start at around $50 per dive, depending on how far from the resort you will go. Additionally, snorkel gear can be rented from as low as $3 per day. 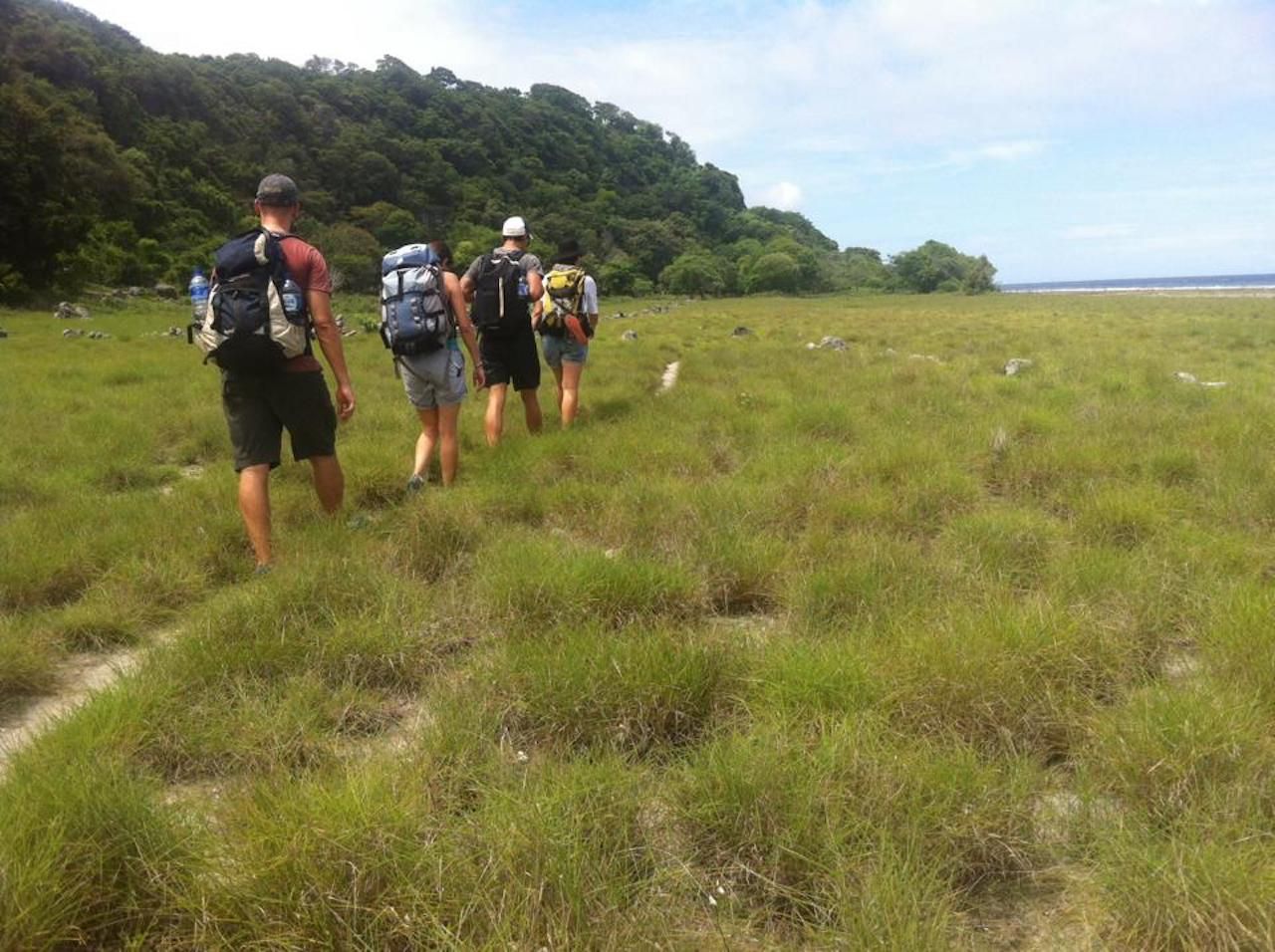 In the dry season or during low tide, walk along the coast and no matter where you’re staying, you’ll find hikeable terrain that leads you past interesting and culturally rich villages lining the coastline all around the island. There are also larger mountain climbs you can do, including Manukoko, the tallest mountain on the island at 3,264 feet. 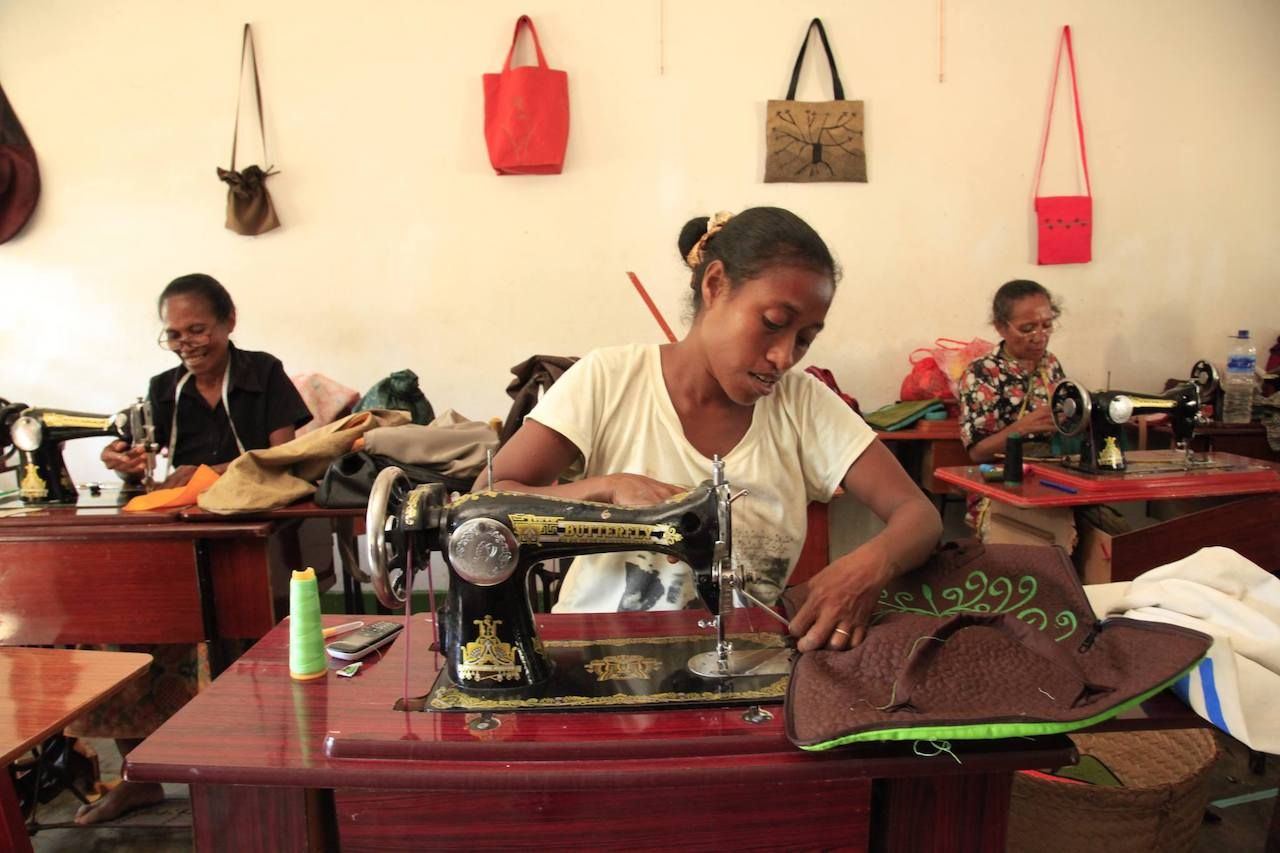 Just across the street from Barry’s Place is Empreza Di’ak, an NGO that offers training for local women using native materials to develop beautiful, intricate handicrafts to sell to tourists. Here you’ll find anything from hand purses to bamboo straws to goggles made out of wood. This is a great opportunity to support the local economy and come home with some cool gifts in the process.

In Vila, one of the two main villages on the island near the Atauro port, is Boneca de Ataúro. This business works with local women to design and create rag dolls and just about anything else you can create with a sewing machine and fabric. On any given day you may find tablecloths, journal covers, or backpacks. Across the street is a jewelry shop called Biojoias, where local women create jewelry from shells and corals gathered on the island.

Every Saturday, in accordance with the ferry, a big market sets up in Beloi selling food, handicrafts, and local produce. Many visitors from the capital come here just to stock up on fresh seaweed. Buy a coconut and wander around to browse.

The best time of year to visit Atauro Island 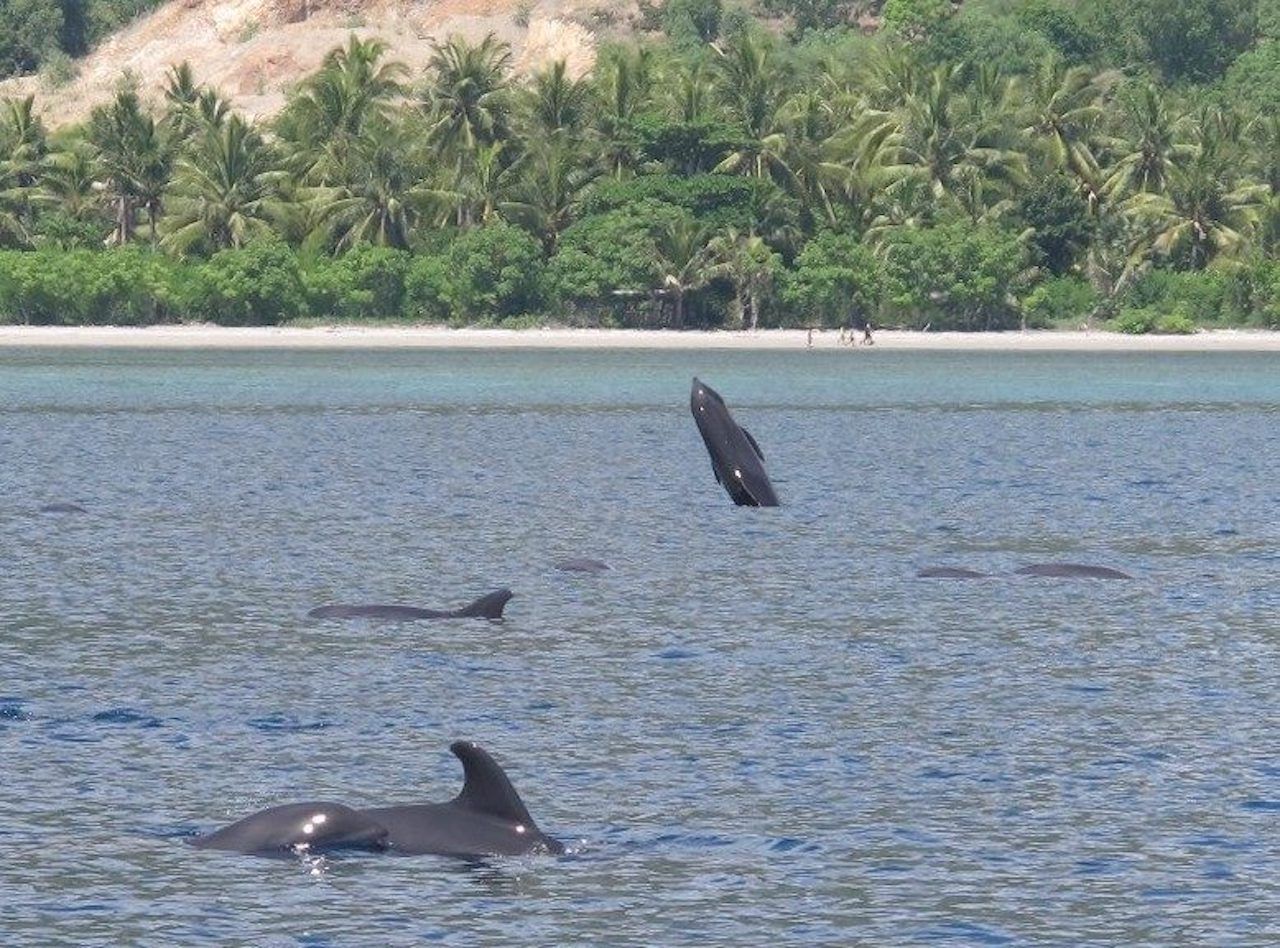 The waters around Atauro are clear year round due to the absence of large rivers on the island — which means no sediment runoff into the ocean during the rainy season that runs from December to April. The deep channel between the mainland and Atauro is also home to one of the largest seasonal migrations of whales anywhere on Earth.

The diversity of these whales is similar to that of the reefs. Large populations of blue whales, beaked whales, melon headed whales, short finned pilot whales, and multiple dolphin species migrate between the Indian and Pacific Oceans each year between October and December. Oceanphiles regularly spot these pods, often over 100 whales deep, even just on the routine boat ride over from Dili.

Most important is that you should come soon. To find such a beautiful gem of a place that few people have on their radar is almost unheard of in the internet era. Large-scale development organizations are pouring millions of dollars into tourism projects on the island, making it increasingly easier to reach and explore. Timor-Leste is among the least-visited countries in the world, making for a unique travel experience that you won’t regret seeing before the masses.

More like this: 5 places to go diving around Palau

The post Atauro Island has the most biodiverse waters in the world, and hardly anyone knows it exists appeared first on Matador Network.